While Canadians struggle with rising energy and food costs, extreme weather events, and economic strife this winter, the Trudeau government is trying to push through a $7 billion deal for 16 F-35 stealth fighter jets with American weapons giant Lockheed Martin. On December 22, Global News and La Presse reported that the Canadian government is planning on signing a contract with Lockheed Martin early in the new year.

According to a leak by federal government officials, the Department of National Defence has received approval to buy the F-35s despite years of widespread opposition from Canadian citizens, celebrities and parliamentarians. The government is advertising the cost as $7 billion; however, that is only the cost of the initial buy-in for 16 F-35’s. Further, while the government is advertising the cost as $19 billion for the full order of 88 fighter jets, according to the No Fighter Jets campaign 2020 report, From Acquisition to Disposal: Uncovering the true cost of 88 new fighter jets, the lifecycle cost of buying 88 fighter jets is estimated to be at least $76.8 billion over 30 years.

Experts, including former procurement chief at National Defence Alan Williams, have denounced this procurement, because the total cost of this purchase has not been fully disclosed by the federal government. Williams said: “It is distressing to read information being made public regarding billion-dollar procurements that is so opaque and piecemeal rather than being transparent and comprehensive…(It) makes it appear the government is hiding the truth from Canadians.”

Our report Soaring: The Harms and Risks of Fighter Jets and Why Canada Must Not Buy a New Fleet details the many adverse financial, social and environmental impacts of fighter jets. Excessive operational and maintenance costs, air pollution, extreme noise and damaging air weapons training in and around Indigenous communities are some of the many harms of fighter jets. As the U.S. Government Accountability Office explains, the F-35 continues to be plagued with cost overruns and technical flaws. In its April 2022 study, the GAO found that the F-35 has over 900 open deficiencies.

A new fleet of fossil fuel-powered F-35s will lock Canada into decades of carbon intensive militarism and prevent us from decarbonizing. One F-35 releases more carbon emissions in one long-range flight than a car does in a year. Moreover, the F-35 is a stealth fighter jet designed for first strike attack, meaning it is only effective as an offensive warplane used against other countries. It has also been designed to carry the B61-12 tactical nuclear weapon and will put Canada in violation of the Nuclear Non-Proliferation Treaty. Fighter Jets are weapons of war and exacerbate global warming.

As winter sets in and Canadians struggle to make ends meet, it is irresponsible and unjust for the Trudeau government to spend public money on American warplanes. Instead, the federal government should invest in affordable housing, health care, education, economic assistance, and climate action. Canada’s planned F-35 procurement is unacceptable and immoral and must be canceled.

Tell your Member of Parliament to say no to the F-35 deal. Join the No Fighter Jets campaign in an urgent weekend of action from January 6-8, 2023. #NoFighterJets #DropTheF35Deal #NoNewFighterJets Learn more at nofighterjets.ca/ourwork.

Canada should be declared a zone of peace, and get out of NATO. Stop, blindly following Uncle SAM. 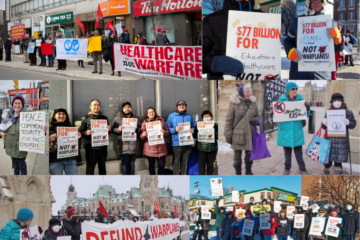 January 11, 2023 Dear Minister Anand, I cannot help but reflect that my concerns outlined in my letter to you on your appointment as MND have come to pass. As a former air force Colonel Read more…